After weeks of planning and excitement the big day was finally here!! DISNEYLAND PARK!! Well I say I had a plan in my head as soon as I entered the park and saw Pluto it went out the window… I just cant resist a meet and greet!

We bought a 1 park, 1 day ticket through attraction tickets direct which cost £42 each and Amelia got in for free as she is under 3. As we bought these tickets we did not need to queue up to pick them up, I had printed them at home, and we could go straight into the parks. I walked in, saw the castle and fought back the tears. I couldn’t believe we were in Disney. But not just in Disney, we were in Disney with our own little girl!

Originally we were going to go straight to the bigger rides before the waits went up so that we could take turns looking after the little ones. However as soon as we entered and saw a character we went straight over for our first meet and greet. There is no better feeling than interacting with the characters and seeing the younger ones do it was even more magical (apart from Amelia who slept through this one…) and made me love Disney even more. 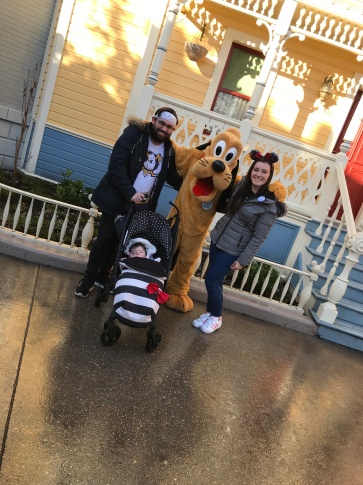 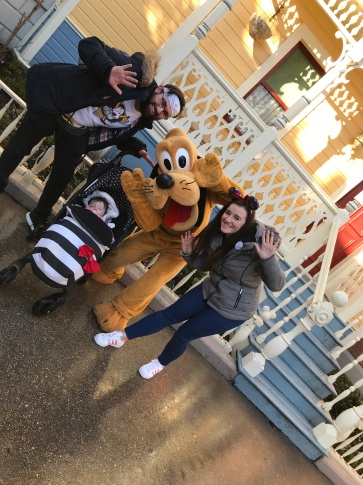 From here we did go over to Big Thunder and got to FINALLY experience this as it was closed the 3 times we attempted it in Orlando on our honeymoon. It was ALOT scarier than I imagined but I’m a little bit of a adrenaline junkie so enjoyed it! 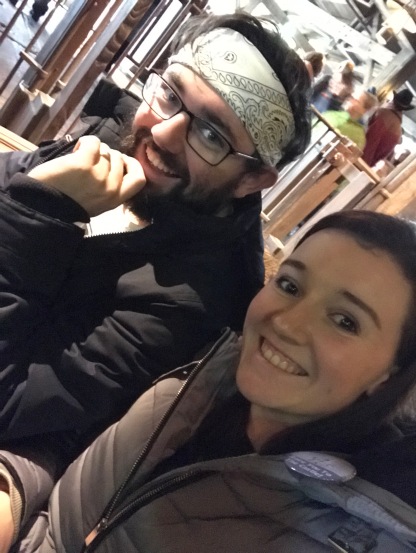 We then continued making our way around the park after we had done a swap with our friends so we all got to go on Big Thunder. We managed to come across another meet and greet, one of my favourites of the trip, with chip and dale. Amelia was still enjoying a morning nap and the interaction from the characters was amazing. They were telling us to shhhh as well as all the cast members and we got the cutest picture of them pretending to sleep next to her. It will be one I treasure forever!

From here we headed over to Fantasyland which meant we could get on some rides with the little ones! Here we got to go on the teacups, small world, dumbo and the carousel. Amelia absolutely loved its a small world and I wish I had gone on it a few more times whilst I waited for the others to go on the other rides. I also experienced real Disney magic from some lovely cast members in Fantasyland…

I had packed Amelia’s pooh bear outfit and pooh bear has always been one of my favourites so when I spotted him doing a meet and greet we hurried to get amelia changed to go and meet him. However when we got to the end of the queue it was closed and we were told he wasn’t coming back that day. I was devastated. That was until Kasia the cast member called me back and told me to wait near the gate just past the meet and greet as pooh was off to get some honey soon. We patiently waited and then the cast member accompanying pooh bear stopped him so that we could get a picture of him and Amelia!! True Disney magic! 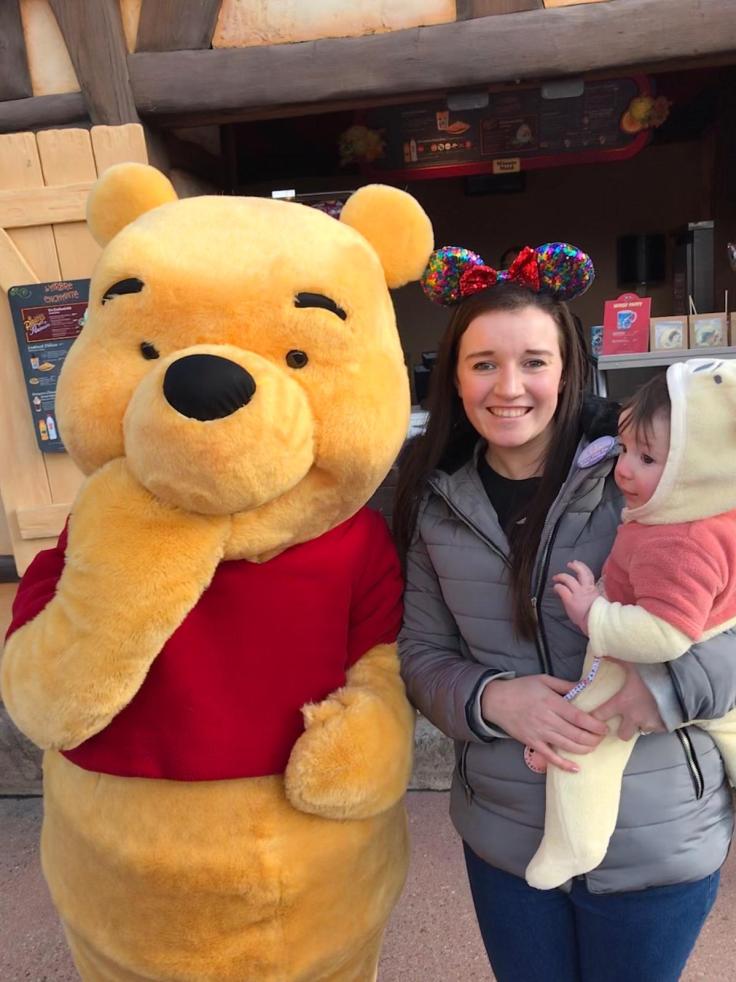 From here we managed to find a not so secret spot just as we were walking through the castle. The princesses were just going out to do the princess & pirate make your choice show and if you stand in the right spot every princess will wave to you as they are walking out. More Disney magic!! We then to watch a bit of the show, which meant getting the song stuck in my head ALL DAY, and then it was over to Hyperspace Mountain.

I’d been on Space Mountain at Walt Disney World but had no idea what I was about to get myself into. It was intense, I loved it, and Liam was in his element. He absolutely loves star ward and this is a must for any star wars film!! We then left the lads to do some more of the rides that the kids couldn’t get on and we went to get a spot for the parade.

I absolutely love Disney shows and parades and this one didn’t disappoint! I didn’t get any photos as I videoed it for my niece to watch and she still asks me if she can watch Elsa and Mouse a couple of weeks after. Just be prepared for the crowds to get extremely busy during the parade. There was a few times where I had to kindly ask people to move away from the pram as they were going to fall into Amelia. She is a baby but she was enjoying the colours and sounds of the parade so I didn’t want her view blocking as when we got our spot no one else was around us. Never the less we enjoyed the parade and I will treasure the memories of her little face forever.

After the parade I went on the hunt for an obligatory Mickey shaped snack and managed to get myself a cookie and not badly priced either. I managed to get two for 3 euros and it was delicious! We then made the most of a quieter main street and got some gorgeous photos of Amelia and the castle (and us as well but more importantly Amelia). 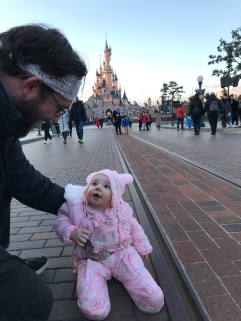 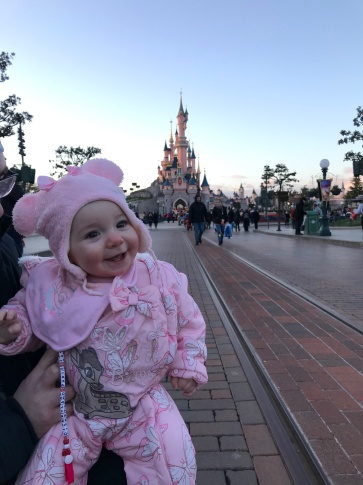 Before Illuminations I got the chance to use the parks baby centre and it is the perfect little escape from the hustle and bustle of the park. Be prepared to change your child on a cold, hard side in the toilets if you do not go to this part of the park. Luckily we carry a portable changing mat for the usual toilet changing facilities. In the baby centre there was an area to breastfeed, bottle feed and highchairs for feeding. There was also changing facilities and a microwave to heat milk and food. For emergencies they also sold baby essentials but if you do not want to use a french brand a 32 pack of pampers nappies was 20 euros and a pack of pampers wipes for 4 euros. This is also where the lost child area is which is like a little nursery setting if the worst was to happen and you lost your little one. Every restaurant I went into in the park also has a microwave so you don’t always need to come here to heat stuff up which was very handy.

Once I had sorted Amelia it was time for the nighttime show Illuminations. As always Disney know how to put on a show and I cried… I cried alot! It wasn’t just the show that made me cry this time but seeing Amelia’s eyes light up and holding her close with Liam. We wern’t just at Disney, we were at Disney as a family. Just be warned that every other song is in French so when I went to record the frozen section for my niece it wasn’t English… it was interesting to show her when i got home! 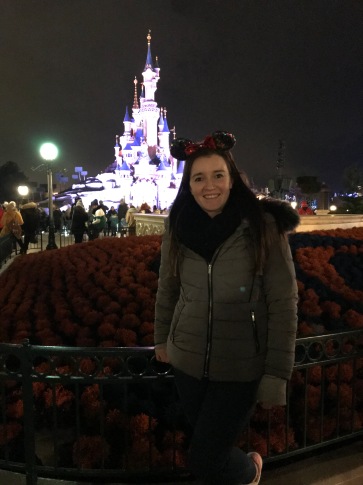 After the fireworks we decided to not rush back for the shuttle as the crowd was ridiculous and we took a left past Casey’s down a little alley where we could look at the shops and stroll back to the park entrance. The day had been magical! Even after leaving it a bit there was still a rush to get onto the shuttle bus and a little dangerous to be honest so we stood back and let the madness continue and decided to wait for the next bus. The next bus appeared not even 30 seconds later and we all got seats and weren’t packed in like sardines. Then it was back to the hotel for pizza and some rest. What a day, roll on day two! 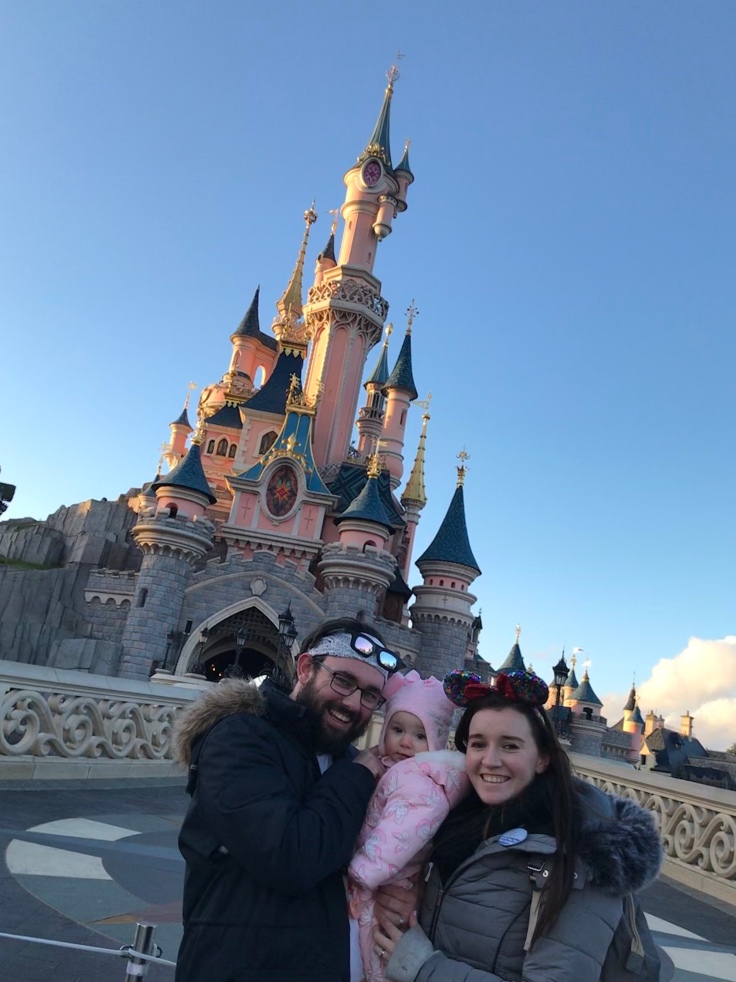