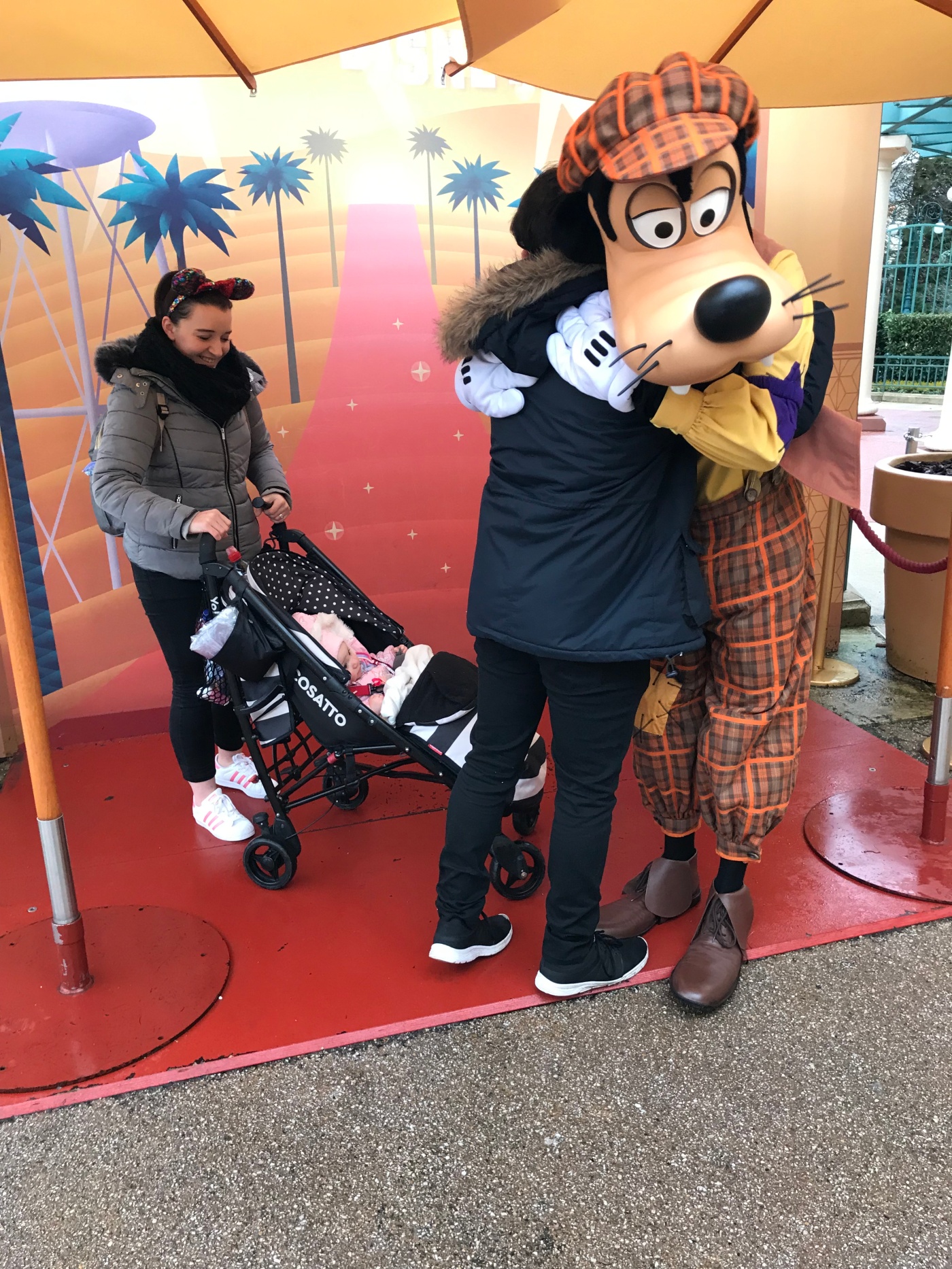 Day two and I think I may have been a little excited as I was awake, up and dressed all by 0730am. However everyone else was not…

I was ready and raring to go and could not wait to get down to breakfast, fill ourselves up and then head over to Walt Disney Studios. This was until I went into the kids room and there was a distinct smell, I turned the light on and looked in Amelia’s travel cot… POO EVERYWHERE! One of the WORST poonamis I had ever seen!!! I immediately woke Liam up and told him to turn on the shower and prepare to shower Amelia as she was literally covered. I don’t think that was the wake up call he was expecting at 7.40 in the morning. It did however get us all out of bed after we showered our 8 month old and decided to throw the poo covered clothes. Little did we know this would be the first of many poonamis that day! Quick tip – don’t change to ready made milk from powder for a few days… babies tummies don’t always like it.

Once we were all ready it was time to check out, store our luggage and head down to breakfast. Similar to day one with a filling breakfast and a swift shuttle bus to the parks. During our shuttle bus we had to make sure we had our phones to hand and were live on the lineberty app. In the studios a number of the meet and greets require you to book onto an online queue and if you are not on the app at 09.45am you risk not getting a slot for the day. Luckily we were speedy speedy and managed to get a booking for Mickey and Spiderman.

Straight through security and over to the ticket barriers where we could scan our pre printed tickets and our luck struck again when Goofy was at the park entrance and we could go for our first meet and greet. Amelia wasn’t very fussed about Goofy but Liam loved a hug and I LOVE a meet and greet so I was happy. 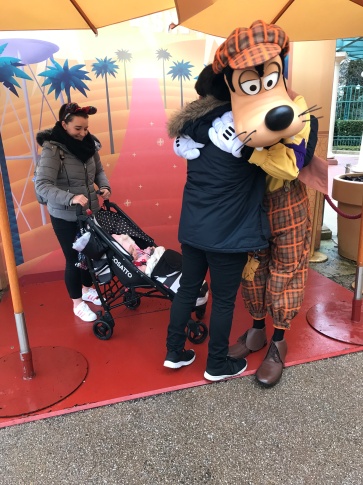 From here it was over to the partner statue and time to decide which ride to do first. The lineberty app had told us we would have at least 90 minutes to wait but 10.25 we got a notification that it was our turn just 40 minutes after we had booked so off we went to Mickey. This was the first meet and greet which the cast members asked us to take Amelia out of the pram but I am so glad we did! The interaction between Mickey and Amelia was magical and made my entire trip!! He played peekaboo with her and tickled her nose which made her belly laugh. I wish I had videoed the whole experience but the photos capture her little smile perfectly and it really did capture Disney magic. 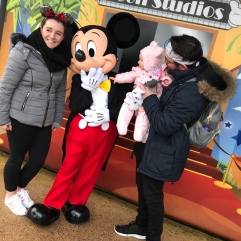 After our unforgettable meet and greet we headed over to Ratatouille and grabbed ourselves a fastpass (and changed another poonami but luckily not as bad this time, just a change of vest) then we headed over in Toy Story playplace. Unfortunately Amelia was just too little for any of the rides in here as you need to be 12 months old, so whilst our friends took their little girl on the rides we enjoyed some photo opportunities, well I say we I mainly mean Liam. 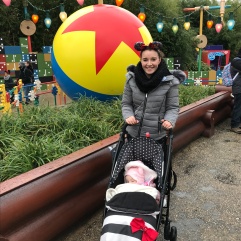 From here we spilt our groups up for a short while and we headed off to the Pandora store in the studios to get Amelia a charm off my Dad for her bracelet she got for her christening. We managed to get an adorable first visit charm and a few other bits in the adjacent shop. It was then our turn for Spiderman.

The lineberty app is meant to cut down the queuing times but we did not find this with Spiderman and after 10 minutes and only one family going into the meet and greet we decided to leave the queue and go to something else. This meant another big ride for the adults and one of my favourites in both Orlando and Paris… Rock & Roll Rollercoaster! I’m not sure whether they are different in the two parks but I love them both equally as much. The only thing about Paris is the little pre show bit is very rushed and the hype is no where near as real. Then as we were leaving the Stormtroopers were parading past which Liam loved and really was in his element.

Cue the tears when the realisation hit and the reality that one of the only things I wanted to take Amelia too may not happen. I was now stood about to get on the ride, tears rolling down my face, feeling like the worst parent/friend/wife in the world when the lovely cast member and the very understanding men with me let us out of a special exit (with another fast pass to use) and it was a run across the park to Disney Junior. They then said it was too late and to come to the later show but this wasn’t possible due to us leaving so luckily more Disney magic came our way. The lovely cast member allowed us all (only me, Liam and Amelia went in) to go into the show at the back and it was as magical as I could have imagined. Amelia loved the lights, music, bubbles, sparkles and much much more!

When we came out our friends had gone to the stunt show so we used this time to have an explore, shop and give Amelia some dinner. We headed to the baby centre at the front of the park to sort little miss out and as we came out this happened… 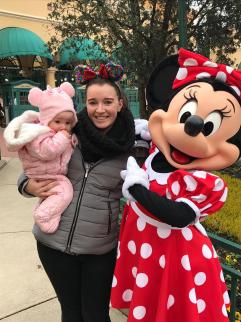 We didn’t think we would get to see Minnie Mouse this trip and after all the tears and stresses it really did add that extra bit of magic. Disney just keeps on giving and I’ve found a new found love after seeing the magic through my daughters eyes! As you can see from the photos Minnie is Amelia’s new best friend and she just wanted to be close to her, so cute!

After we bought more merchandise (there will be a haul blog coming up) it was time to meet up with everyone and head back to the hotel ready to go home. We didn’t get to do everything in the studios due to closures and shorter time there but all that means is we will have to return. I do love this park and I know it is Liam’s favourite as there is something for everyone and I can’t wait to see what they bring to it in the future as I’ve heard some exciting rumours! 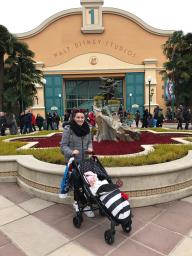